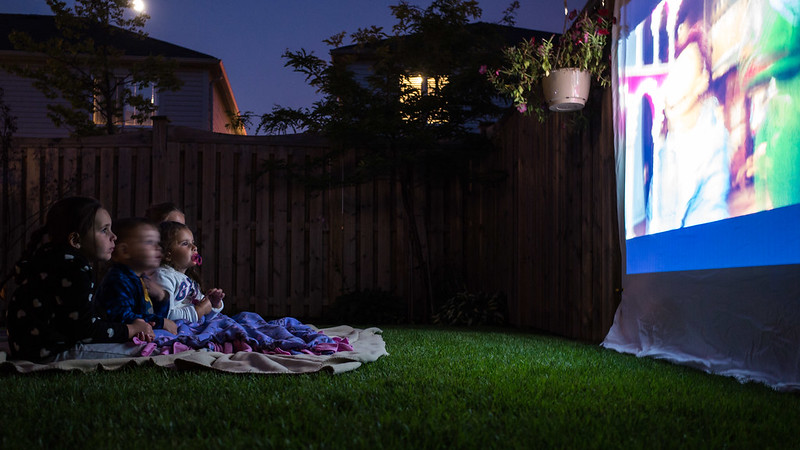 Hot summer nights are fantastic for outdoor backyard movie viewing for adults and kids of all ages for that reason you will want to make sure you have one of the best projectors for daylight viewing.  During the summer the sun doesn’t set until 9:00 PM or later in some places depending on where you live. You will have to take into account the length of the movie in case you have really young ones that have an earlier bedtime or people visiting that will not be able to hang around too late.  For these reasons you will probably want to begin the outdoor movie prior to the sun setting.

Starting a movie with the sun still shining can pose some viewing challenges, thus you will need to take that extra sunlight into consideration.  There are techniques to beginning your daylight viewing of the movie.  The number one  thing you will need to start watching your movie with some lingering daylight will be  a projector with a higher number of lumens.

The higher the lumens, the better, but your projector should have a minimum of  at least 2500 lumens. The  list below has been carefully crafted to provide you the help in selecting the best projectors for daylight viewing.  Take your time and make the final decision that best fits your needs. 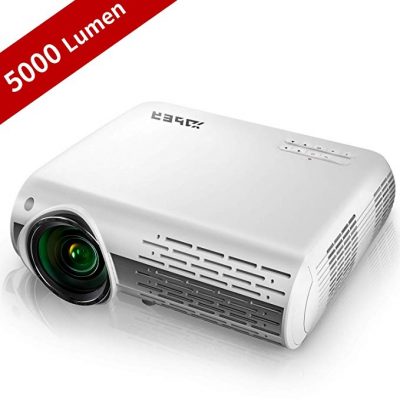 Check the latest price on Amazon
The Yaber Y30 is an indoor and outdoor projector that adopts an advanced German LED light source, high quality materials and delicate manufacturing process. It has bright large-screen with great image clarity, unmatched color accuracy and sharp image detail. Its use is relevant to both homes and businesses. With its 5000 lumens high brightness, the Y30 projector gives over 50+% brightness than other mini projectors and it gives your eyes a better service. The YABER Y30 TV projector can be used in low light conditions. With its motorized feature, Y30 projector allows the reduction of the image up to 50% of the original length and width with the the use of the remote control and to adjust the focus, you just need to rotate the lens of the projector. 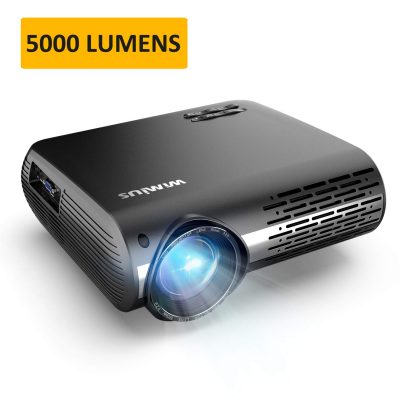 Check the latest price on Amazon
The WiMiUS P20 projector is created based on customer’s need. It has an improved brightness, resolution, contrast ratio, lamp, and speaker, and so on. Its 5000 lumens makes it possible to use it when the lights are on or in the darkness. The P20 projector comes with ±50° wide range keystone correction which makes it easy to adjust the picture to whatever angle you prefer using the remote control. It is built with dual 3w speakers which makes it needless to have external speakers when playing movies. The P20 projector has a reverse projection capability but lacks Wifi functionality. It is not only suitable for entertainment but also can be used for business in small rooms.
Pros
Cons 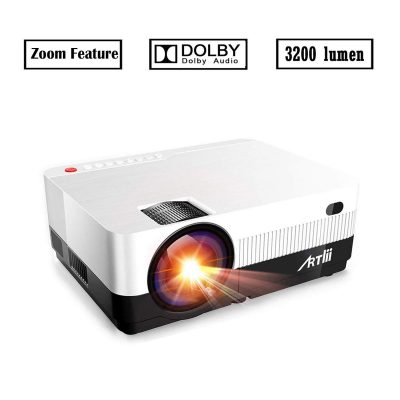 Check the latest price on Amazon
The Artlii portable projector is a compact and handy projector. Its 720P native resolution and 3200 lumens brightness makes it suitable for night viewing. In order to have a fantastic experience, the portable projector supports various multimedia devices including; PS4, DVD, X box, TV box via HDMI input, PC, hard disk via USB port and so on. It is designed to answer possible customer’s questions as it can be easily connected to your phone or iPad via extra Wifi Dongle or Chromecast.
Pros
Cons 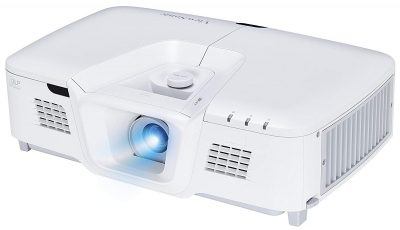 Check the latest price on Amazon
The ViewSonic PG800HD projector with its 1920 x 1080 resolution and 5000 lumens of brightness is an ideal 1080p projector for large venues, and business and education environments. It features 1.3x optical zoom, centered lens, vertical lens shift, and vertical keystoning. It is designed to deliver a powerful audio-visual performance. It is user-friendly with its self- on and off configuration capacity which will be determined by the user. For rear projection, a short-throw projector to produce a larger image from two feet away will enable the PG800HD to produce a 21-inch image from 2 feet away.
Pros
Cons 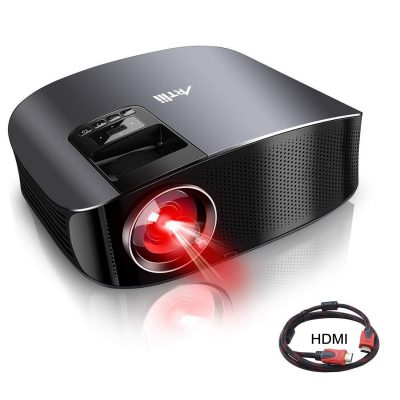 Check the latest price on Amazon
The Artlii movie projector is an ideal projector for daylight viewing. Its large screen and bright with crisp image make it outstanding. The 4000 lumen brightness and its large 200-inch projection screen attest to this as it gives viewers a fantastic watching experience. It has a dual (3W) built-in Dolby stereo which makes it a successful audio visual projector. Artlii movie projector supports 4 projection modes which makes it easy for the viewers to select whichever angle fits them: front projection, rear projection ceiling projection, and ceiling rear projection. The projector can view Netflix and Amazon prime video using wired adapters.
Pros
Cons 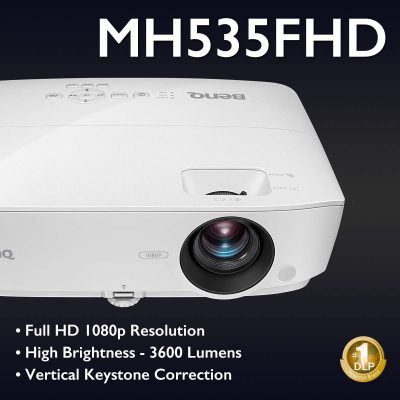 Check the latest price on Amazon
The BenQ MH535FHD projector is an ideal home entertainment projector. With its brightness of 3600 lumens, the BenQ MH535FHD projector ensures brilliant color performance making it fantastic for entertainment such as movies and sports. The BenQ projector vertical keystone correction and a 1. 2x zoom allow for easy installation. It supports Bluetooth speaker when it is paired to the Firestick and it is long-lasting with the optimized projector lamp life, which is up to 15,000 hours with SmartEco technology
Pros
Cons 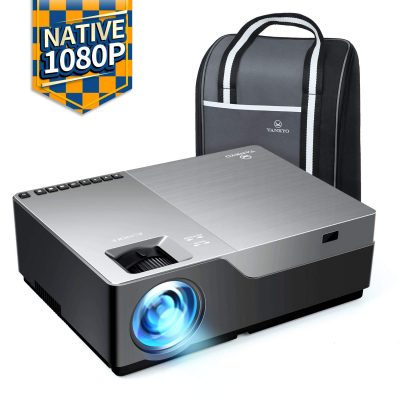 Check the latest price on Amazon
The VANKYO V600 projector comes with a native resolution of 1920×1080 and a contrast ratio of 5000:1. It gives 3 times more details than 720P projectors and it delivers impeccable image quality for professional use. It features 5000 lux of brightness and provides up to 300″ of display in size. It is designed to last long with its long-lasting lamps that can span 10 years of about 2-3 hrs of daily use. It supports presentation from laptops, smartphones and from streaming devices. The VANKYO V600 projector has digital zoom only and does not support Optical zoom.
Pros
Cons 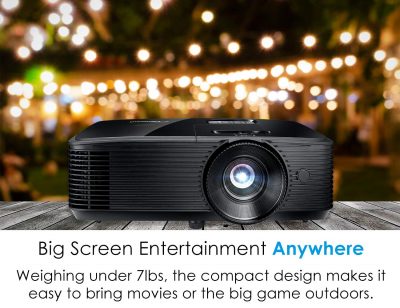 The Optomal HD143X is designed to bring the cinematic experience into your home.With its 3,000 lumens, 23,000:1 contrast ratio, reference display mode, and REC.709 colour support, the optomal HD143X home theatre projector gives extraordinary video quality perfect for movies, sports and gaming. It  serves as a fantastic projector for daylight viewing as it transforms the user’s living room to a cinema when paired with a Blu-ray player, high-performance gaming PC or console. To mount it on the ceiling, you have to buy a bracket that you use to mount the projector on ceiling. 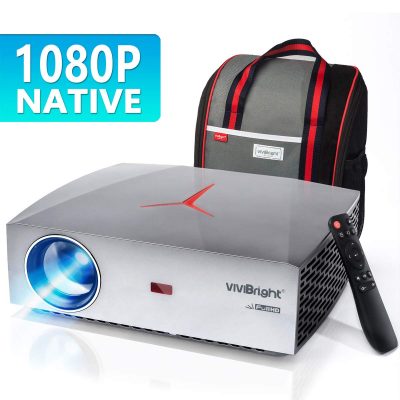 The VIVIBRIGHT F40 projector is a newly upgraded led projector. It provides standard 1920/horizontal and 1080/vertical native physical pixels, 15,000:1 contrast ratio and matches the best sound quality, as well as true color LCD panels. It offers clear and bright colors even in daylight environment with its 4200 Lumens led white light. With up to 300″ large screen, the F40 projector is ideal for gaming, home or outdoor theater, video projector and PPT presentations. The F40 also supports HDMI, double USB Port with Multimedia direct play function, the Standard configuration with Most professional-level digital audio interface (SPDIF out interface), and audio output. The power supply of this projector is 90-240V AC, 50-60Hz.

Projectors come in a wide range of brightness levels that vary between white and color brightnesses which are measured in lumens. The predominant lumens measurement typically advertised for a projector is typically the white brightness lumens rating. White brightness tells us the amount of white light that is transmitted by the projector.

Depending on your requirements make sure to verify and take the color brightness into consideration when making a purchase.

What is a good brightness for a projector?

Dots per inch (dpi) or pixels per inch (ppi) are common references to indicate how many dots or pixels are displayed when showing images or other content.  Resolutions range from 480p from the lower end to 720p and 1080p which is HD quality to 4K which is today known as ultra HD.

The higher the resolution the better.  This provides the projector with more pixels to draw the content to provide cleaner, crisper, higher quality images.

Projectors use microdisplays which could be DLP, LCD panels or LCOS chips.  These microdisplays have a fixed amount of pixels. Thus, native resolution is the true physical resolution that exists on a projector provided by these chips / panels.  A projector will never be able to display more “actual pixels” than it contains on the microdisplay panels or chips.

What does it mean to convert a non-native signal format to a native resolution?

Scaling will always make the resulting image less clear than the original signal.

There are several different projector formats that exist that are used for various purposes.  Typical business projector formats have an aspect ratio of 4:3 or 16:10 and are either XGA, SVGA, WUXGA, or WXGA format.

What is a good contrast ratio for a projector?

One of the biggest determinant of overall picture quality is the contrast ratio, which is the difference between the brightest white a projector can produce  and the darkest black. The contrast between white and dark will provide you with the sharpest picture eliminating any washed out or dull colors as shown above.  Having the correct brightness is critical for optimal visibility.  When you hear a contrast ratio of 1000 x 1, that means the brightest pixel will be 1000 times brighter than the dimmest.  Good contrast is mainly about seeing greater detail on the projected image, no matter what the image is being shown either video,  text, graphs, or pictures.  Keep in mind, if you are planning on using the projector outside for daylight viewing  the contrast ratio won’t matter much whether its 20,000:1 or 1,000:1.  Any significant light source will lessen the contrast ratio benefits, therefore it would be ideal to close the shade or turn off the light or wait until sunset before you start projecting.

From the above-listed projectors kinds and brands, you have varieties of choices to choose from. As we have mentioned in this article we review the top projectors for outdoor viewing.  The main requirement for daylight viewing is high lumen ratings.  This article lists these such projectors.   Every one of these projectors has their functions; some specially designed for video viewing and some for educational and business purposes. The best projector for daylight viewing that we have reviewed is the YABER Native 1080P Projector for its 5000 lumens brightness and its multipurpose functions.

Related Articles
We will be happy to hear your thoughts

LEGAL INFORMATION
SizeThemUp.com is a participant in the Amazon Services LLC Associates Program, an affiliate advertising program designed to provide a means for sites to earn advertising fees by advertising and linking to Amazon.com.
Categories